Albert Einstein regarded compound interest as the most powerful force in the universe.  He’s quoted as saying “Compound interest is the eighth wonder of the world.  He who understands it, earns it; he who doesn’t, pays it.”

So, what is compound interest and how can I understand it?  Let’s keep it simple!

….But Benjamin Franklin Said It First

Compound interest says that as money grows, future growth grows on the previous growth.  Or as Benjamin Franklin once said, “Money makes money.  And the money that money makes, makes money.”  Say that 10 times fast!  Let’s look at an example of this below, assuming 10% compound interest. 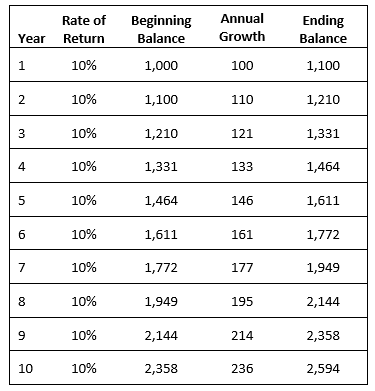 We can quickly see that by year 10, the 10% rate of return is no longer growing $100 like in the first year.  It’s now growing $236!  Again, “Money makes money.  And the money that money makes, makes money.”  Powerful words from Benjamin Franklin.

But how can we make sense of this in a simple calculation?  Let’s introduce the Rule of 72.  While not exact, it’s a rough approximation of how compound interest works using a simple mental math formula.

This calculation says that if you take 72 divided by the annual rate of return, you’ll get the approximate number of years it takes to double.

For simple math, let’s assume an investment has an 8% annual rate of return.  Using our equation above, this investment would double every 9 years.  Now, let’s put this into practice.

Let’s assume you’re 22 years old starting a job having just finished college.  You have $1,000 to your name and you plan to retire in 45 years when you’re 67.  If you earned 8% annual rate of return for those 45 years, you’d have 5 doubles.  Remember… 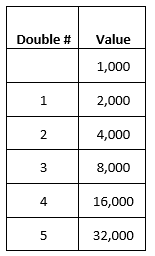 When learning of this strategy, the first thing someone often says is, “what if I get a higher rate of return….say 12%?”  Using this formula, the results are staggering!  That same $1,000 would double every 6 years.  This results in approximately $128,000 after 7 doubles, or age 64 in our example above.

As a financial planner, we recognize we can only control certain aspects of a financial plan.  One thing we can’t control is long-term rates of return.  We can put ourselves in a position for higher or lower expected rates, but ultimately the market prices our returns.  Because of that, we can’t rely on a higher rate of return in long-term planning.

So, let’s focus on what we can control.  Remember our example of the 22 year-old saving for retirement?  Like most people in their 20’s, this person has other things to focus on.  He or she enjoys traveling, is saving for a house, and wants to keep up with friends who are doing all the “fun things.”  Because of that, our 22 year-old wakes up and it’s 9 years later.  He or she is 31 years old and decides to start saving with that same initial contribution of $1,000.  Assuming the same 8% rate of return, they only saw 4 doubles by age 67 and they retire with the $16,000 in their account.  Not bad!  But their retirement experience is half of what it could have been if they started earlier.

We can’t control future market returns, but we can control how we invest and when we start.  Beginning early makes a significant difference in the long run.  We recently had a 30 year-old in our office, a little down-trodden because his retirement account was only up $10,000 over the past year.  Just the day before, I had a 60 year-old in our office and she was shocked to learn that her account was up $240,000 over the past year.  Both accounts returned virtually the same rate of return over the past year.  But the law of large numbers resulted in a much more significant impact.  The 60 year-old was fortunate to have started early.  And the 30-year old is looking forward to the days when his early start in his 20s will pay dividends…literally.

…Is to Play the Long Game

Benjamin Franklin’s $5,000 would have grown over 200 years to $24,194,750,000.  That’s a little over $24 BILLION.  In practice, it didn’t grow this big because of the investment philosophies of the cities and the payout that occurred 100 years in.  Regardless, it’s a lesson to all of us that investing is about playing the long game.  And in the wise words of Benjamin Franklin, “Money makes money.  And the money that money makes, makes money.”

The information provided is for general information only and not intended as investment advice.  Investing involves risk including the potential loss of principal.  No investment strategy can guarantee a profit or protect against loss in periods of declining values.

Past performance does not guarantee future results.  The examples provided are hypothetical and are not representative of any specific investment.  Your results may vary.